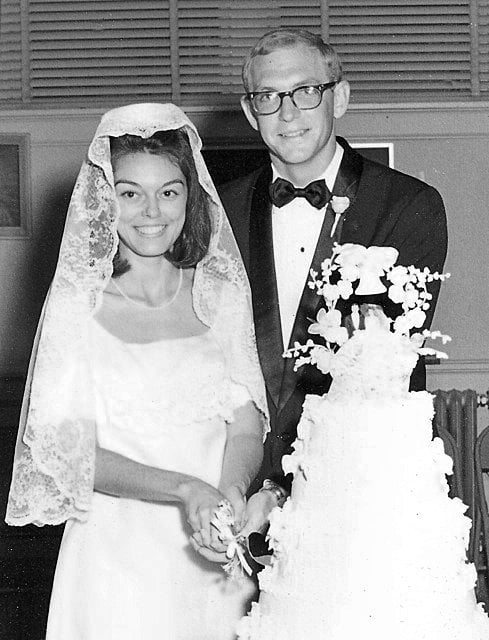 50 years in the making: Mitch Oakley and the origins of Charles Aris Inc.

Part I of a series celebrating a half century of Charles Aris Inc.

What comes to mind when you hear or see the name Charles Aris?

If you call our executive search firm and ask for Charles, you’ll learn it’s simply the name of the organization. And yet, though no one here answers to that name, Charles Aris is personified by one individual in particular: our founder and chairman, Charles “Mitch” Oakley.

Charles Aris team members know Mitch as the foundation of our organization, which is happily celebrating a half century of executive search. Mitch is a seasoned business developer and recruiter … he shares his knowledge and wisdom in informal one-on-one conversations and folksy staff training sessions … he’s tall, with broad shoulders and a booming voice … and he writes in an elliptical style … just … like … this.

Mitch is a trail guide for team members in the firm, a representation of what we and our enterprise strive to be: expert, consultative and determined to be the best. But there’s much more to the story, one only a select few in the firm have been privileged enough to hear.

A product of Greensboro, North Carolina, Mitch was born into a middle-income family. From the start, he possessed social skills which enabled him to instantly connect with an array of people from all walks of life. While growing up in the Old North State’s third largest city, Mitch made the most of opportunities to interact with and learn from individuals of influence, developing a keen understanding of success in the business world and a variety of steps which increase the likelihood of it.

“After meeting different people who lived a high-quality lifestyle, I began to realize that I had the potential and ability to do the same,” Mitch said recently as he reflected on his life and career up to now. “I had to ask myself: What do I want to do with my life and how can I get there?”

Fortunately for Mitch, clarity was rarely far away.

“It all comes down to the position you put yourself in,” he said. “I wanted to provide for my future family at the highest level, so I decided to take the necessary steps to get there.”

Mitch’s journey led him to East Carolina University, where he spent one year before returning to Greensboro and continuing his studies at Guilford College.

“We didn’t have the means to continue paying for school, so I chose to come home and go to school nearby at Guilford,” he said. “It also gave me a chance to start working and figuring out what I wanted to do.”

Pieces of the puzzle

Mitch went to work for Richardson-Vicks Inc., a company known for over-the-counter medications such as NyQuil and Vicks VapoRub which was later acquired by Proctor & Gamble in 1985. He put his education to good use as an assistant plant accountant, serving Richardson-Vicks in a variety of financial functions.

His life took an important turn on December 24, 1966. While visiting his parents on Christmas Eve, the Oakleys attended a holiday social in Oxford, North Carolina, a small town little more than an hour east of Greensboro.

“I saw this girl across the room,” he said. “It was right around 10 o’clock that night and I just knew I had to get to know her.”

Her name was Betsy, and unbeknownst to Mitch at the time, she would become the matriarch of Charles Aris Inc.’s owning-operating family.

“I had to be quite persistent; it took six or seven phone calls for her to agree to go out with me,” Mitch said with a chuckle. “I knew she had a boyfriend at the time but I figured maybe I could move him out of the way if I tried hard enough.”

Betsy finally agreed to a date one Sunday evening. The pair enjoyed dinner at a local hangout and had the first of what would be many meaningful conversations.

“By date three, I think she realized I wasn’t a bad guy,” Mitch said. “Betsy was at UNC-Greensboro, completing her schooling, and I invited her over to my apartment so she could study. That night we went out for dinner and I said to her, ‘You know, I think you and I would make a really great couple through life.’ ”

Amid his work at Richardson-Vicks and his blossoming relationship with Betsy, Mitch’s number was called to serve in the U.S. Army. He packed a bag, collected his paperwork and went to a local bus station, ready to report to basic training. For the next six months, Fort Jackson would serve as his home in Columbia, South Carolina, as Mitch and his fellow soldiers trained for potential deployment in Vietnam. Though he was never called overseas, serving instead in the U.S. Army Reserve over the course of the next two years, Mitch cites his time in basic training as one of the defining experiences of his youth.

At that time in the United States, organizations were responsible for having a role open for returning military members. Mitch was welcomed back to Richardson-Vicks with open arms following the completion of basic training.

“When I returned to Richardson-Vicks, I had a position running a production line and was responsible for 30 people,” he said. “I was 23 or so at the time, so I was very motivated to make an impact.”

And that he did. Under Mitch’s supervision, efficiency improved by 5 percent while the plant maintained the company’s quality standards. Processes he developed were later approved and implemented across the plant’s production lines.

“At this point in life, I was determined to be the CEO of Richardson-Vicks,” Mitch said. “I was going to run that company.”

Never one to settle, Mitch further improved processes to heighten manufacturing efficiency another 5 percent. This time, he did not receive the approval for which he had hoped. Citing certain production rate requirements, the plant declined to move forward with further manufacturing improvements.

“After that experience, I made the decision that I did not want to make money for the stockholders of someone else’s company,” he said. “It drove me to start looking for commission-paid sales jobs where I could execute on my entrepreneurial desires.”

His search led him to the local office of Management Recruiters International (MRI). Originally seeking opportunities which MRI of Greensboro was actively looking to fill, he was offered a counselor role in the firm. Mitch completed a brief training program and quickly discovered his ability to recruit.

“I found out that I enjoyed it, the challenges and rewards of it, communicating with people I didn’t know and learning from them,” Mitch said. “I liked it all.”

A star is born

The position offered a minimum wage plus commission, forcing Mitch to quickly learn to earn at least enough to cover the cost of living. The organization’s business model was centered around contacting companies and writing contingency job orders for positions typically paying wages ranging from $20K to $40K.

“A big job in those days, around 1968, was $25,000,” Mitch said. “When you work in a contingency world, there’s no risk for the company you’re working for. These people would say, “Help me find this type of person,” with no risk to them, because there could be several firms working for the same customer.”

This model forced Mitch to act with urgency, targeting and attracting the best candidates he could find, registering them in the system and getting them started at the customer company so that he could get paid for his efforts.

The double-knit fabric craze offered Mitch the opportunity to hone a particular skill set and begin placing shift-level supervisors in various client organizations. With a reasonable price point and the opportunity to make great money if you had the right machinery, all that was left for organizations was talent to lead the charge.

Two years in, Mitch had developed a groove recruiting across numerous manufacturing industries. Not only was business hitting its stride; so was his relationship.

Nearly three years from the day they met, Mitch and Betsy wed on September 6, 1969.

A graduate of the University of North Carolina at Greensboro with a degree in home economics, Betsy had a job that required the newlyweds to live on the High Point telephone exchange. They settled in Jamestown, North Carolina, in one of the most unlikely of places.

A converted chinchilla barn behind the house of a man named W.C. King became the Oakleys’ first home. The King family had previously been in the chinchilla business and converted the space into a livable area not long before Mitch and Betsy arrived.

“It was literally a three-room building in his backyard,” Mitch said. “The living room, which had an oil circulated heater, had been the room where the chinchilla incubators were. All of the outlets were on the ceiling, so we had lamps plugged into the ceiling, if you can believe it.”

Rent was $65 per month and included everything Betsy would need for work, outside of long-distance telephone calls. She had a salaried position, which offered some stability for the couple as Mitch worked to grow his business at MRI of Greensboro.

“Those first couple of years were really spent developing my craft and learning what works, what doesn’t work, things of that nature,” Mitch said. “I closed my first job in my fifth week there and it was just a couple of years later that I had the opportunity to buy the business that would ultimately change our lives.”

The importance of diversity and inclusion in the workplace

Create a future beyond your current internship role

"Thanks, Charles Aris, appreciate your dedication in finding such great talent for us to select from."

— The VP of Strategic Product Management for a Fortune 30 retailer, responding to an email informing him that Charles Aris Inc.'s candidate had just accepted the retailer's job offer.

Charles Aris Inc. quickly identifies and delivers leaders who are qualified, available and interested in enhancing your organization.

DO NOT SELL MY INFO